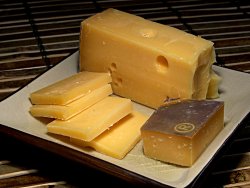 A cheese farm in Lievelde, Gelderland was recently robbed of 300 cheeses in the middle of the night. Soon after, the cheeses were being sold on Dutch auction site Marktplaats. In connection with the robbery, the police caught a man and a woman (insert Bonnie and Clyde cheese joke) who were probably not the masterminds behind the operation, and have been let go.

The robbers caused between 30,000 and 40,000 euro worth of damages to the shop that thankfully is insured. Back in 2016 there was a wave of robberies in the same area, with at least six cheese farms robbed of 10,000 euro worth of cheese, including the one in Lievelde.

(Link: waarmaarraar.nl, Photo of Gouda by Jon Sullivan, released into the public domain by its author)

This entry was posted on Wednesday, November 25th, 2020 at 12:03 pm and is filed under Food & Drink. You can follow any responses to this entry through the RSS 2.0 feed. You can leave a response, or trackback from your own site.